- March 06, 2010
Ok, its pretty clear that I'm a Penguin. I love Linux, Gnome and the principles of OpenSource. But, and its only a small, yet annoying’ but’ typical of any loving relationship, that there are little things not done that we take for granted will be done. Sounds familiar? The Gdk libraries contain some really useful tools, so why some of the simpler things are omited? For example, there is a gdk_pixBuf_fill command, for clearing the screen to a single colour by painting each pixel individually, yet there is no library command for painting a single pixel itself! Not an insurmountable problem, but a capability that one would expect to be there.

The assumption is, perhaps, that any drawing operations will be done to GdkDrawables, i.e. anything in a window rendered to the screen. GtkPixBufs are ‘off-screen’, the buffers that can be draw and worked with independently or prior to any rendering operation. My guess too is that if a programmer needs to draw to a buffer, its better done by rendering to it using Cairo.

To resolve this omission, I’ve examined the Gdk source code for something useful to hack. Of the course the right func is the above said gdk_pixbuf_fill. Now I have a usable pixel painting function that runs nicely, having put together what might be described as the missing gdk_pixbuf_set_pixel. Now the complement, a gdk_pixbuf_get_pixel function, is the thing to put together. Where’s all this leading, one might ask... to the addition of a set of pixbuf image manipulation commands! More on this later. 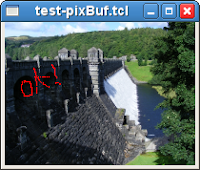 And the script that built it.

Popular posts from this blog

I've finished taking a look at enhancing the add sub-command ensuring bakcward compatibility with the legacy effects. This snippet shows how it works:

In order for the interpretor to know which row to use the second argument needs to be an integer. '0' means insert at the top of the list with -1 the bottom. In a pre-existing list, any other positive value in between will insert at the appropriate level. If the specified row is a value that exceeds the length of the list, the item will be appended to the end.
The command returns the number of the row just inserted.

Finally, providing a non integer values will also result in appending the value to the bottom of the list unless an empty…
Read more

- April 01, 2019
How time flies! I knew that I hadn't made one of this blog posts for some time but, didn't think that it such a long time ago. Well, some enhancements to the core modules has taken place although not too many.  In a nutshell a couple of bug fixes and some enhancements to a few widget options. As usual latest code available from SourceForge.

- November 13, 2010
The past couple of days has seen me gnocl scripting rather than working on core code. One pet project of mine is the automated creation of edocs and ebooks. Althought I have an old version of AbbySoft FineReader Professional which runs on my laptop and an equally ancient version of Acrobat 6 (on my Linux box I have PDF Studio which is brilliant value for money) I want to add docs as I work on my desktop machine. To do this I created a front Tcl/Gnocl front end to control the scanning, clean-up and cropping of scans, the conversion to DJVU with OCR and packing of graphics to a multipage TIF for later processing in AbbySoft FineReader.  Everything works fine but my control script have been hacked to gether over the past year or so and so some rationalisation is in order. But, but, but who likes writing code from scratch all the time! Creating new basic GUIs is always a chore so I thought that I'd create something to the growing gnocl megawidgets package. Todays addition will build …
Read more